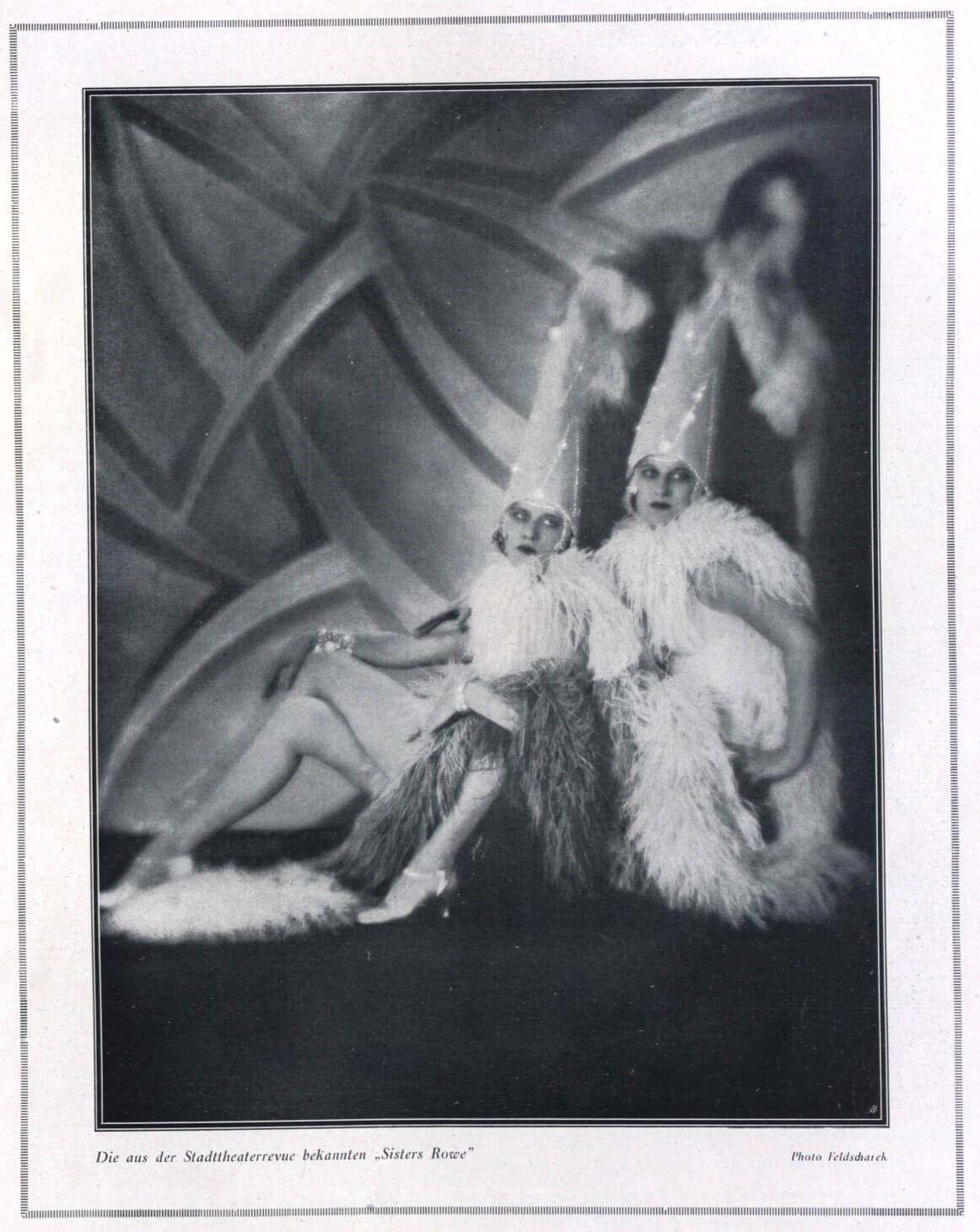 portrait of the dance act ‘[The] Sisters Rowe’

In turning the pages of Moderne Welt one immediately wonders why anyone would choose to launch a magazine just weeks before the end of the Great War. First published in October 1918, Moderne Welt was a German-language magazine produced by Atelier Bachwitz; a publishing company based at Löwengasse 47 in Vienna that was founded by Arnold Bachwitz (1854-1930) in 1898. The magazine was by no means the first to be published by the prolific company, which had previously printed the fashion-oriented Chic Parisien (1898-1939), The Large Mode (1900-1922) and The Elegant Woman (1900-1929). However, Bachwitz’s last venture marks an interesting turning point – socially, culturally and politically – in the history of Austria. Particularly the photography featured in Moderne Welt reflects some of the progressive social attitudes that were developing within the country from the late-1910s to the 1930s. Most importantly, in looking through the photography of this eclectic magazine, one can form a clear picture of how modern women and women photographers were increasingly foregrounded during the interwar period.

To comprehend this development, it is important to firstly understand the unique cultural landscape that existed for photography in Austria – particularly Vienna. By the early-twentieth century, the capital city had become the financial centre of the Habsburg Empire creating a wealthy class of businessmen, industrialists and bankers, many of whom descended from the Jewish community. [1] Seen as a means of social advancement, education was considered an important part of a child’s upbringing by the Jewish bourgeoisie, regardless of whether the child was male or female. [2] Many women – especially Jewish women – were therefore encouraged to study photography. As a new discipline that was not regarded as high art, studio photography in particular was seen as offering a realistic possibility for commercial success. [3] Moreover, the most important training institute for photography in Austria was located in Vienna. Established in 1888, the Graphische Lehr- und Versuchsanstalt allowed women to attend photography courses from 1908 onwards. [4]

An early pioneer of studio photography, Dora Kallmus (professionally known as Madame d’Ora, 1881-1963) was the first woman to study theory at the Graphische Lehr- und Versuchsanstalt. In 1907, Kallmus opened her own studio in Vienna where she specialised in taking photographic portraits of the Viennese elite. Her commercial success would pave the way for other women photographers, such as Edith Barakovich (1896-1940) who worked as an apprentice for Kallmus while studying at the Graphische Lehr- und Versuchsanstalt from 1913 to 1915. In 1918, Barakovich also opened her own studio in Vienna where she began a successful career as a portrait and fashion photographer. [5] From the earliest issues of Moderne Welt the work of these two women is abundantly present; for instance, in the first issue of the magazine, nine out of the twenty-one photographs featured were taken by Madame d’Ora.  Similarly, from 1918 to 1919 – only a year after establishing her own studio – Edith Barakovich’s studio portraits were featured in 60% of all published issues of Moderne Welt [Fig.1] (Dora Kallmus’ photography was meanwhile featured in every single issue). 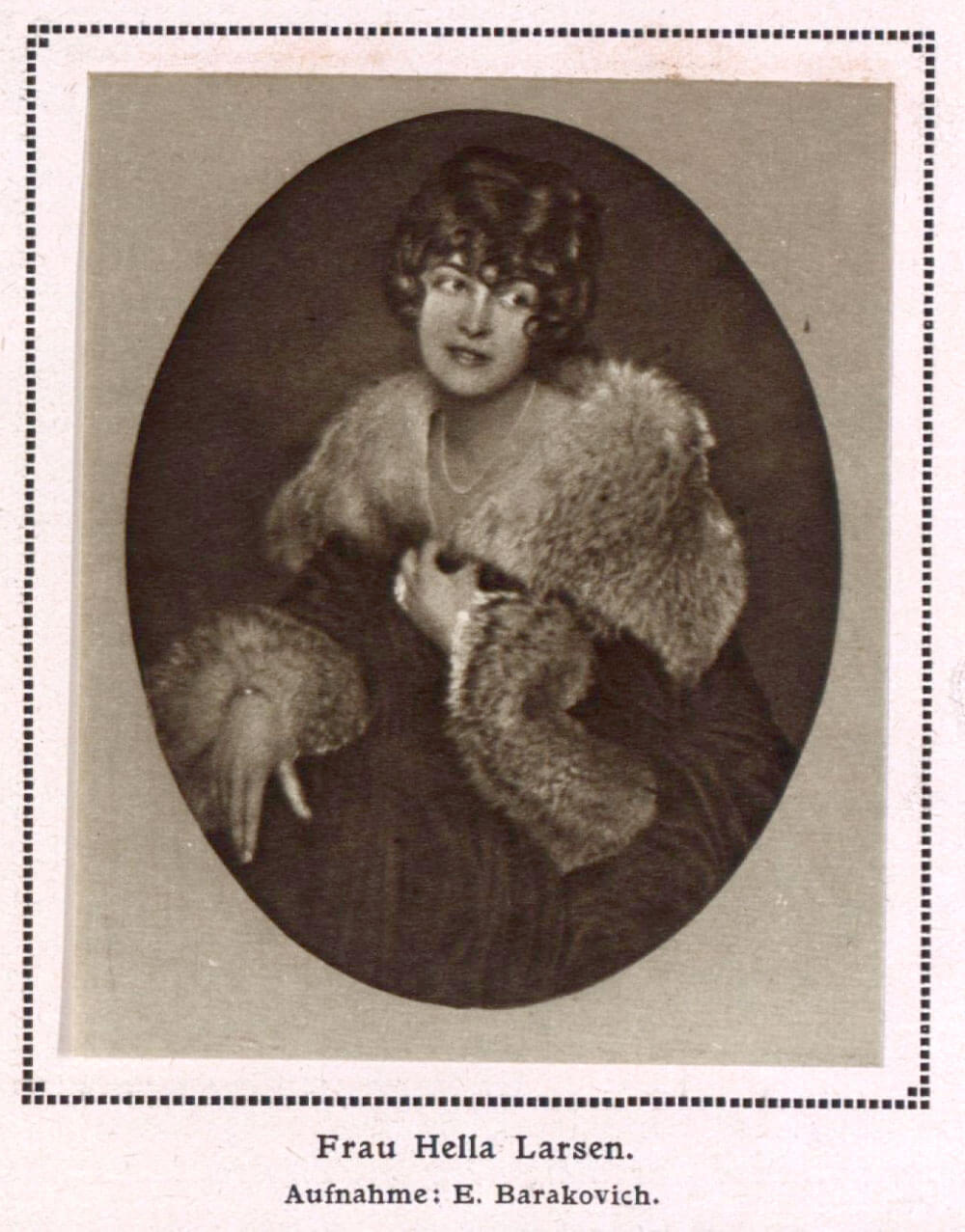 However, while the works of these pioneering women photographers were printed in Moderne Welt, the general purpose of photography in the early issues of the magazine was unclear. Subtitled ‘an illustrated review’, Moderne Welt was initially devised as a summary of contemporary culture, namely literature, art, theatre and fashion; there was no mention of photography as something to be admired as a visual art form in itself. [6] Photographs within the early issues of Moderne Welt were therefore mostly illustrative portraits. However, while photographs of men were frequently accompanied by a relevant article discussing their cultural achievements, portraits of women were often disconnected to the texts they illustrated, which were also often fictional. [Fig.2] Most portraits of the women up until 1924 are difficult to contextualise; we are often only provided a name or vague reference to the sitters’ beauty. [Fig.3-4] While the stories of male sitters were often elaborated upon, the women photographed in these early issues of Moderne Welt remained silent; only to be looked at, not thought about extensively. 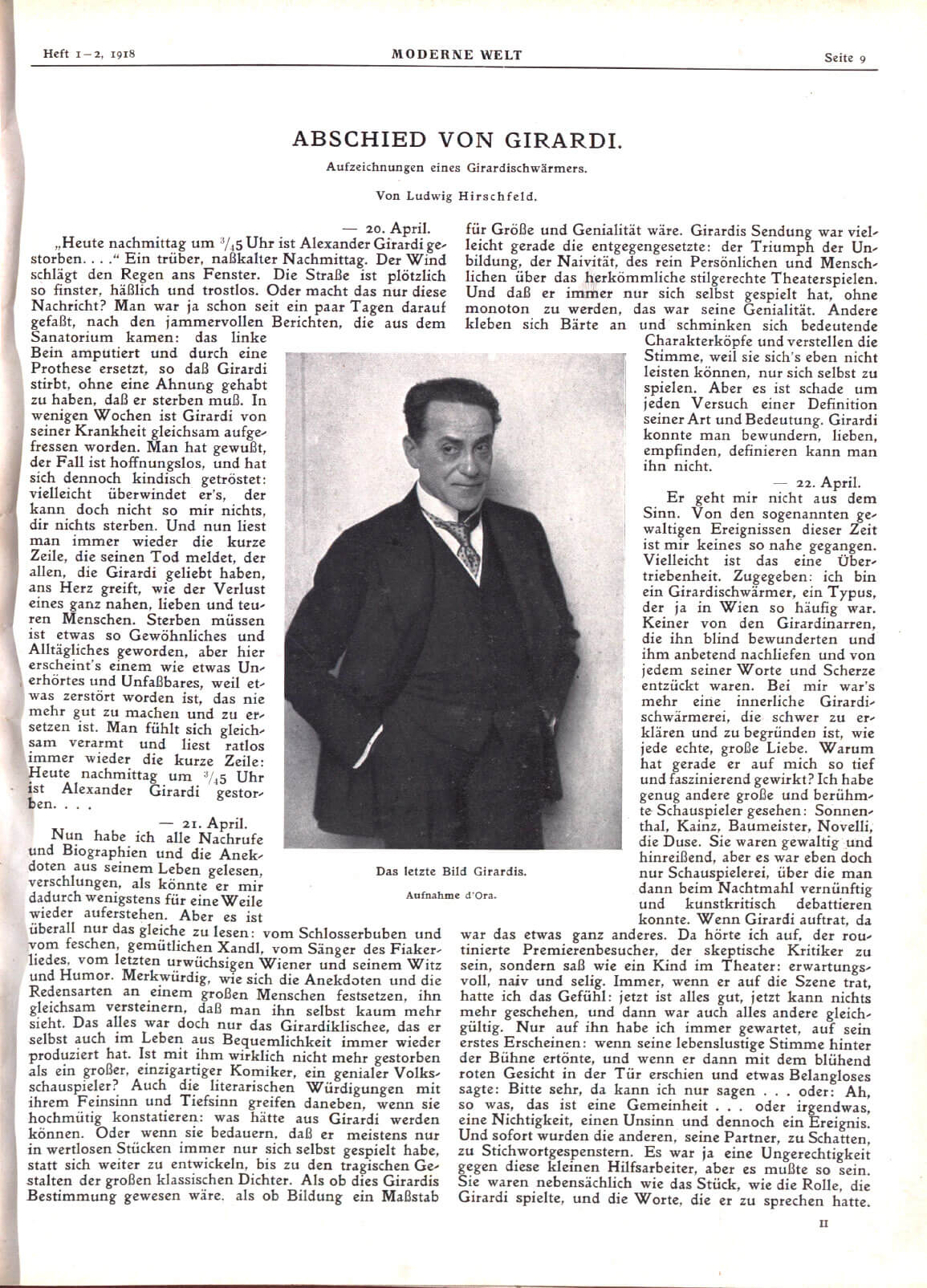 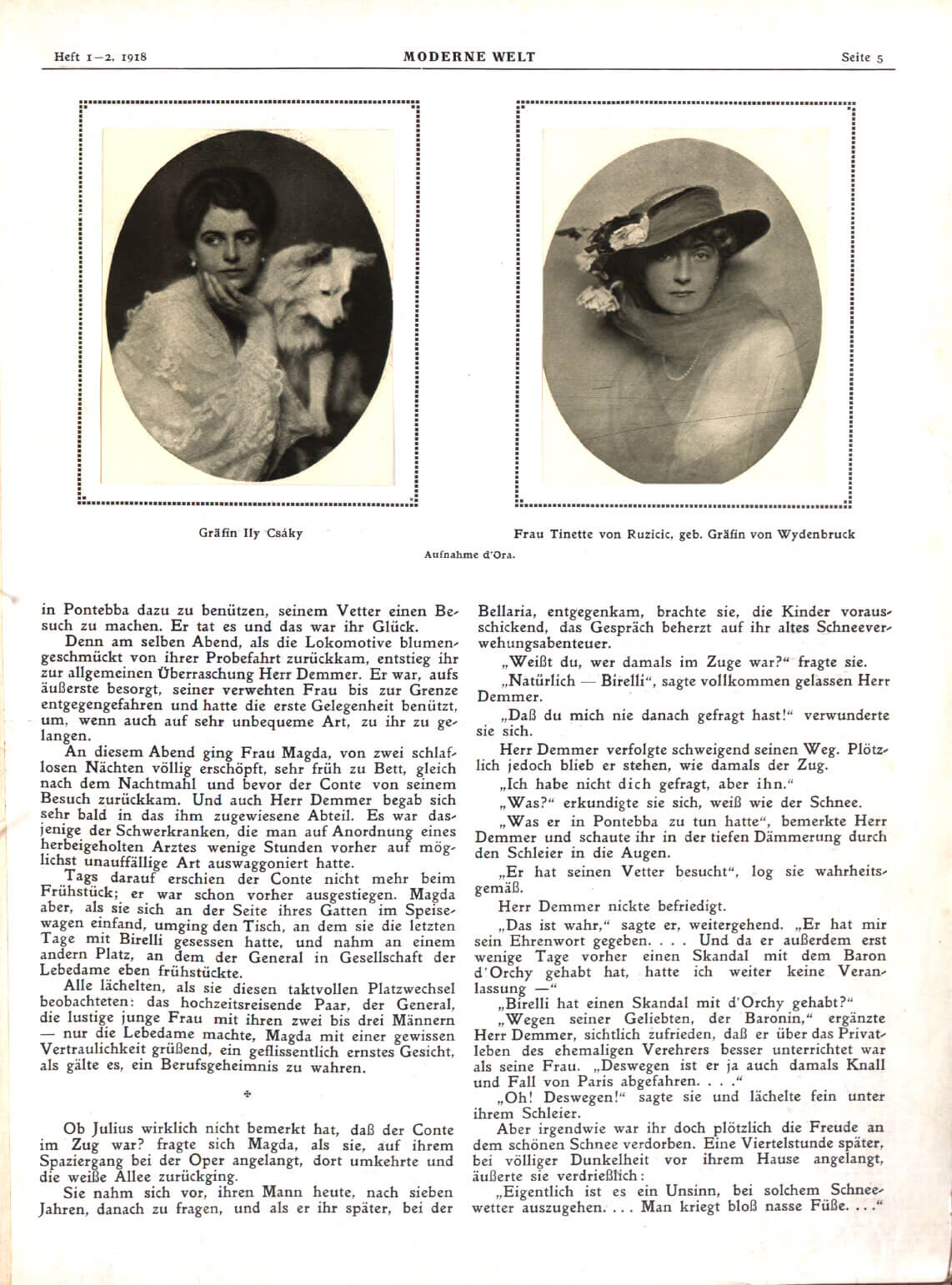 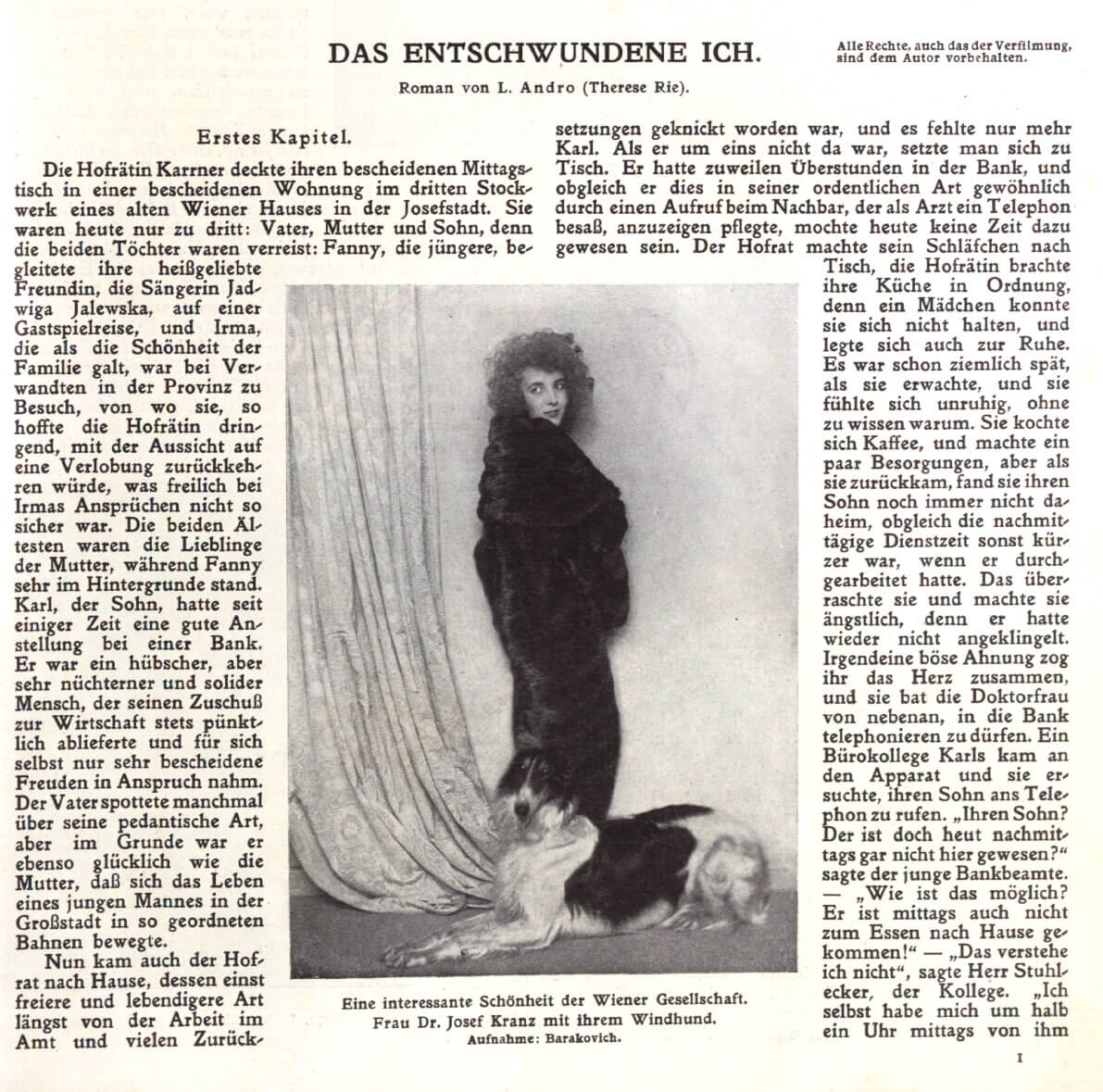 in Moderne Welt, issue no. 9, 1919. Frau Kranz is described as ‘an interesting beauty of Viennese society’. The surrounding text is a fictional work by Austrian journalist and writer

Photographs of women would only gain their voice in Moderne Welt as the magazine became increasingly targeted towards them. Firstly, fashion became more important; a separate supplement in Moderne Welt dedicated solely to women’s fashion was first introduced in 1923. [Fig. 5] Then between 1925 and 1927, Moderne Welt gradually changed ownership, which would result in several stylistic and editorial changes; the magazine contained shorter articles and more images, became more concerned with lifestyle rather than culture per se, and became more celebrity oriented. In other words, Moderne Welt developed into the precursor ‘to ever more modern women’s lifestyle and fashion magazines.’ [7]By 1927, Moderne Welt had fully transitioned from ‘an illustrated review [of] art – literature – fashion’ to ‘the paper for elegant ladies.’ [8]

The magazine’s new focus on fashion and celebrity correlated with an industry boom of women photographers during the First Austrian Republic (1919-1934). The mobilisation of men during the Great War drastically increased the uptake of women to the Graphische Lehr- und Versuchsanstalt, so that by the mid-1920s around 80% of quality studio photographers in Austria were women, many of whom were – for previously mentioned reasons – part of the Jewish bourgeoisie. [9] From the 1927 to the mid-1930s, the number of women photographers who regularly published their work in Moderne Welt jumps from two to nine different studios. Many of these female photographers – Pepa Feldscharek, Edith Glogau, Dora Horovitz, Kitty Hoffmann – had graduated from the Graphische Lehr- und Versuchsanstalt. [10] As the number of photographs by women photographers grew, so did the diversity of the women represented in Moderne Welt. From actresses to opera singers, dancers, pilots, and professors; women were increasingly being discussed and staged as a key part of the cultural zeitgeist. [Figs. 6-8] ‍ 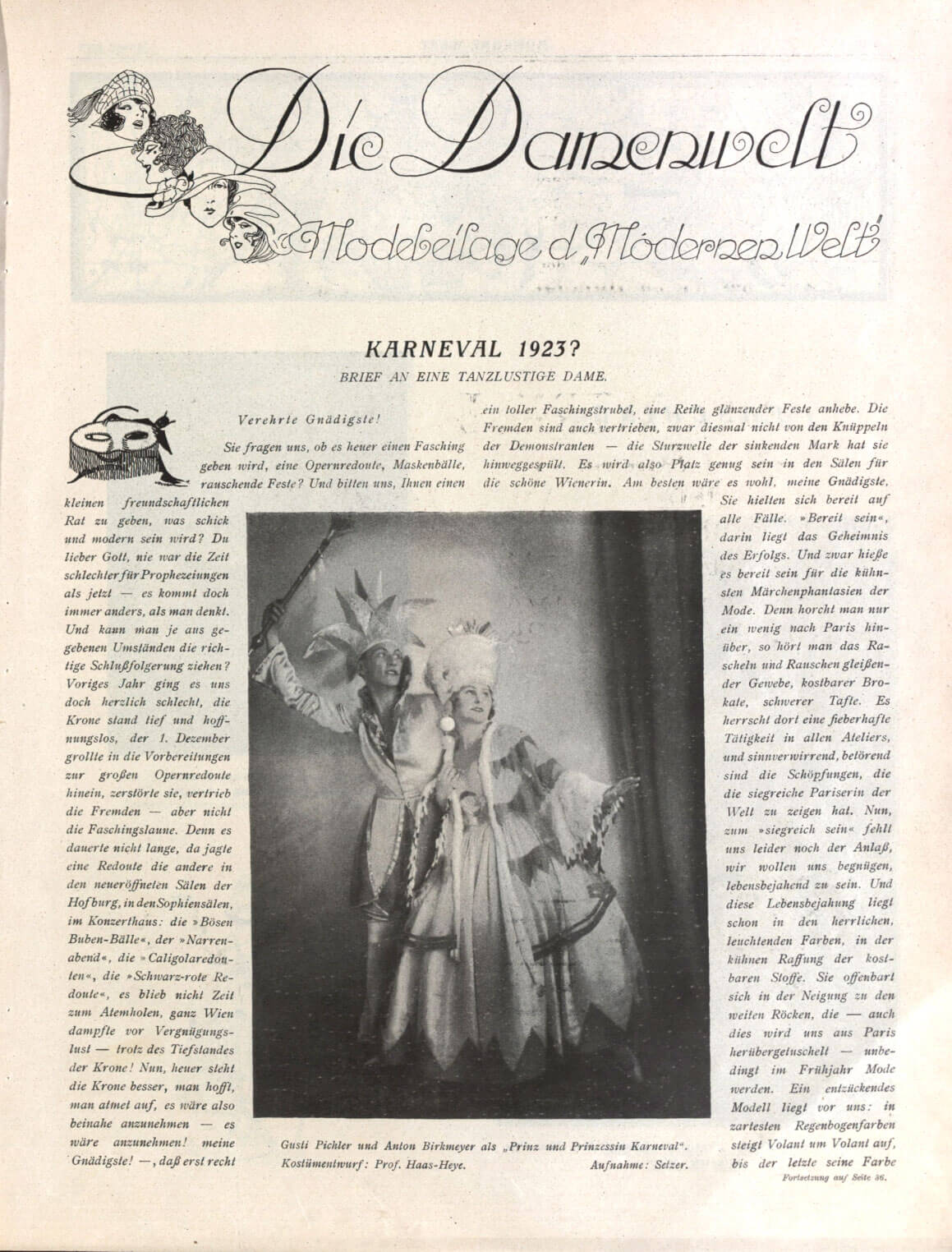 portrait of the dance act ‘[The] Sisters Rowe’ 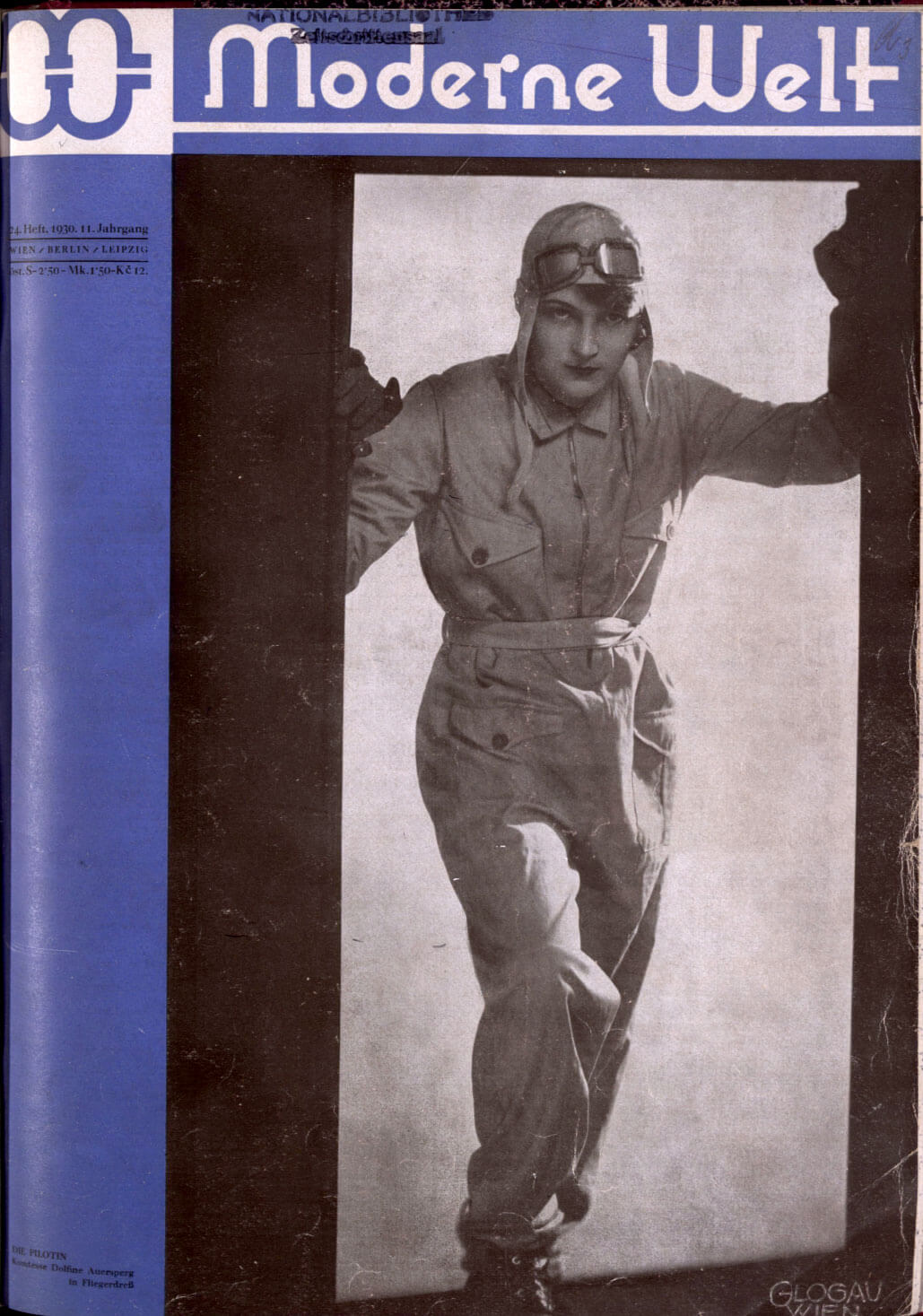 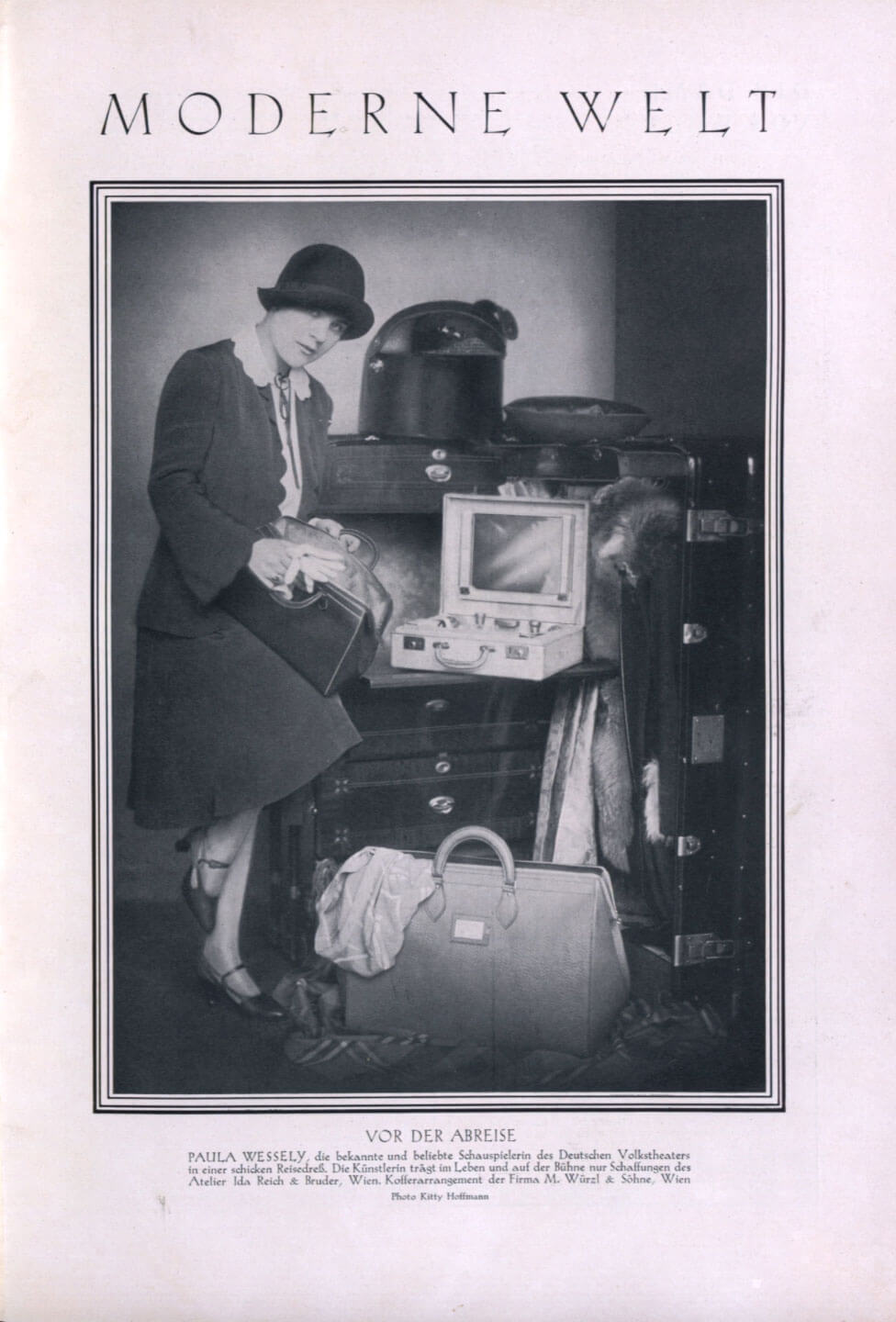 By the late-1920s, photography was also being taken more seriously as an art form. In 1929 the Deutscher Werkbund organised the first international exhibition – Film und Foto – which was dedicated solely to photography. Another version of this exhibition was organised in Vienna a year later, in which several Viennese women photographers exhibited their work. [11] The stylistic experimentation pioneered by these women photographers was celebrated on the cover of Moderne Welt in 1932. [Fig. 9] Although photography had sporadically adorned the cover of Moderne Welt since the early 1920s, Trude Fleischmann’s image is the first photograph that does not show a particular individual or celebrity. Rather, Fleischmann utilises the dramatic staging of contemporary dance; something that was closely associated with modern femininity and sexual freedom at the time. [12] This particular cover of Moderne Welt shows how women photographers started to take creative agency over their work. In photographing subjects in ways that translated abstract ideas around the individual represented, photographers like Trude Fleischmann were elevating their work above the mere representation of people, produced thus far by less experimental (but more commercially viable) studio photography.

As the distribution of the magazine expanded from Vienna to Paris, London and Berlin, the editors of Moderne Welt began to increasingly print photography from international sources. From the mid-1930s onwards, while the number of photographs by Austrian women photographers in Moderne Welt declined, more and more German women photographers were introduced, such as Yva (1900-1944) and Hedda Walther (1894-1979). [Figs. 10 – 11] However, in comparison to its contemporaries, Moderne Welt was the only magazine in which this noticeable decline occurred. For instance, from 1933 to 1937 Die Bühne (1924-1943) – a popular theatre and culture magazine based in Vienna – frequently featured works by at least eight different Austrian women photographers. By comparison, between 1933 and 1937, Moderne Welt only regularly featured works by Madame d’Ora and Edith Glogau; the latter of which was almost exclusively as advertising. [Fig. 12] [13] A more sinister interpretation of this decline could be that it was politically motivated. By the early-1930s, ownership of Moderne Welt had entirely exchanged hands to Dr. Alexander Schilling-Schletter; a known fascist. [14] Is it possible that the exclusion of Austrian women photographers was an anti-Semitic act?

[13]
It is important to note that while Edith Glogau was Jewish, Madame d’Ora converted from Judaism to Catholicism in 1919. Lisa Silverman, Madame d’Ora: The Shalvi/Hyman Encyclopaedia of Jewish Women, https://jwa.org/encyclopedia/article/madame-dora 09.01.22
‍

[14]
See articles written by Dr. Alexander Schilling-Schletter ‘The Essence of Fascism’ in the right-wing magazine Der Getreue Eckhart (October 1930) or ’14 Year Republic’ in Der Notschrei (November 1932) in which he describes ‘a better future under the victorious Sonnenrune of the swastika.’ 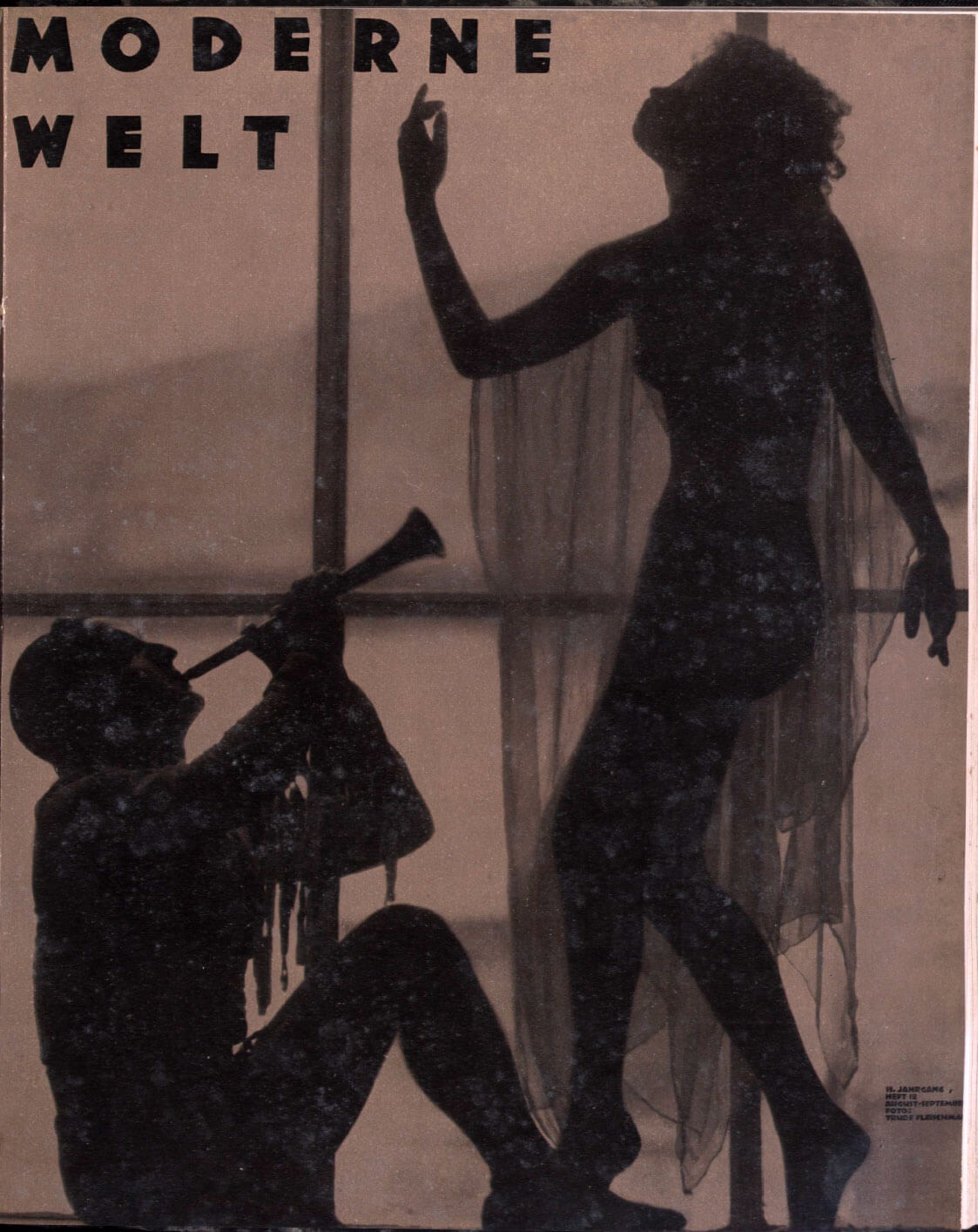 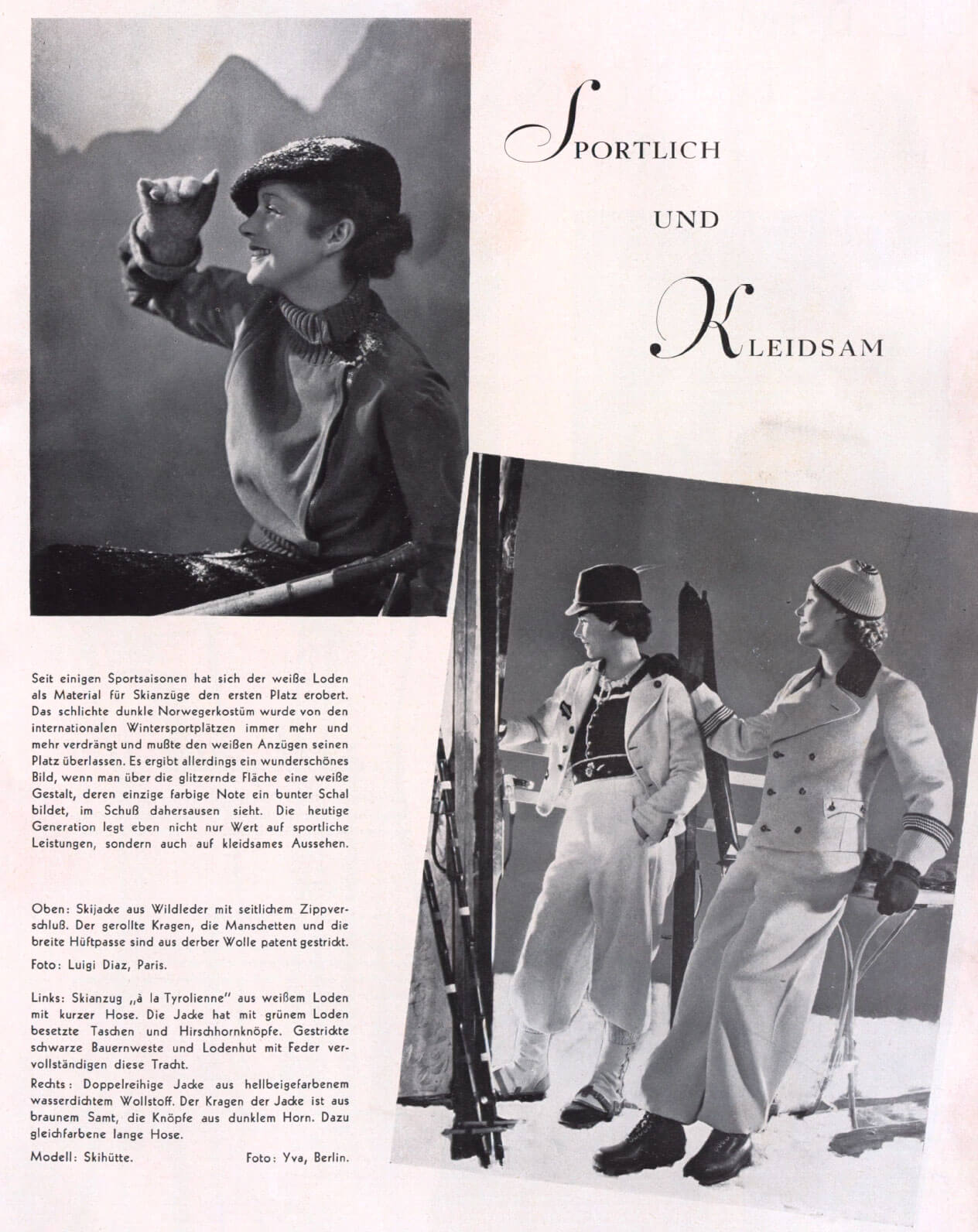 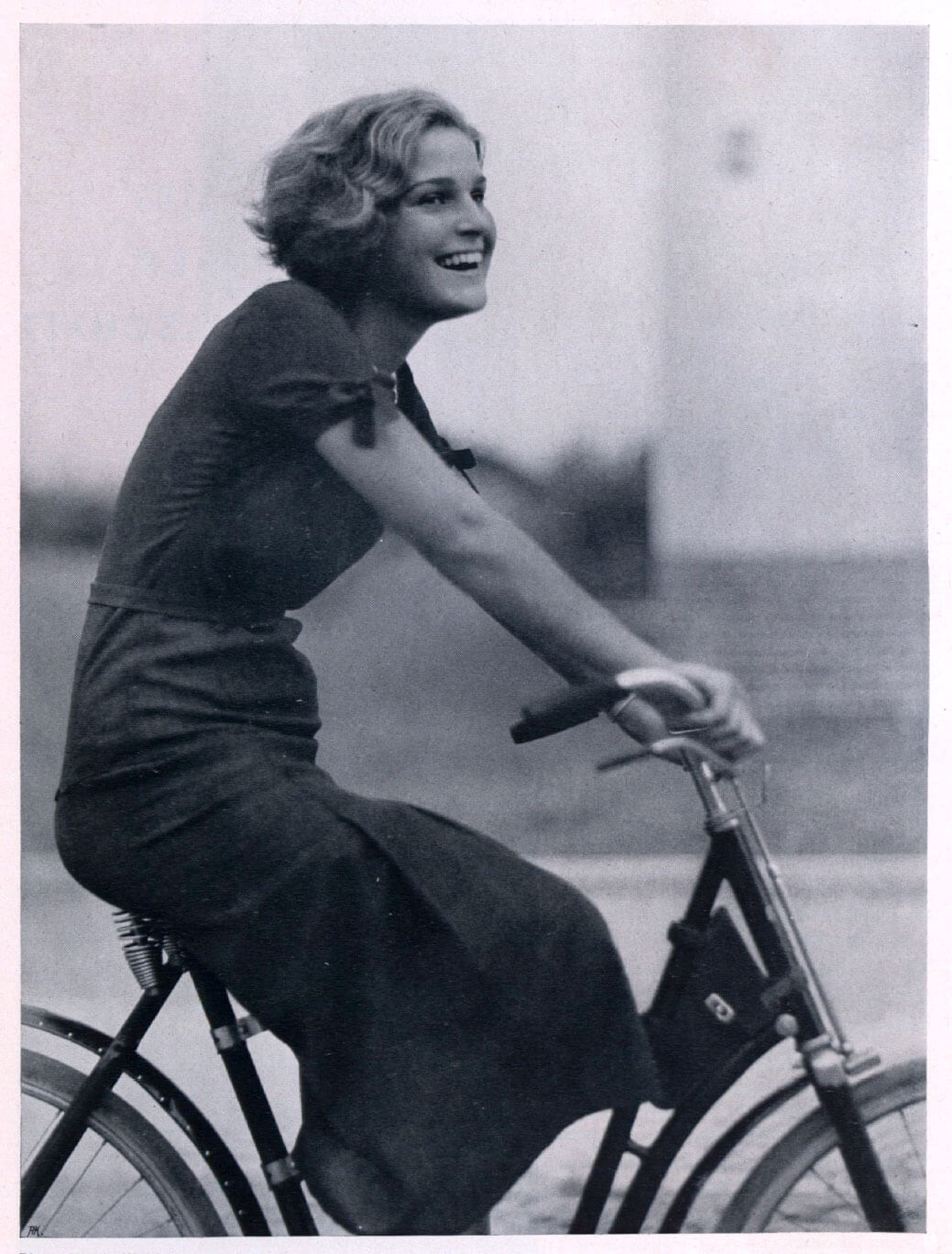 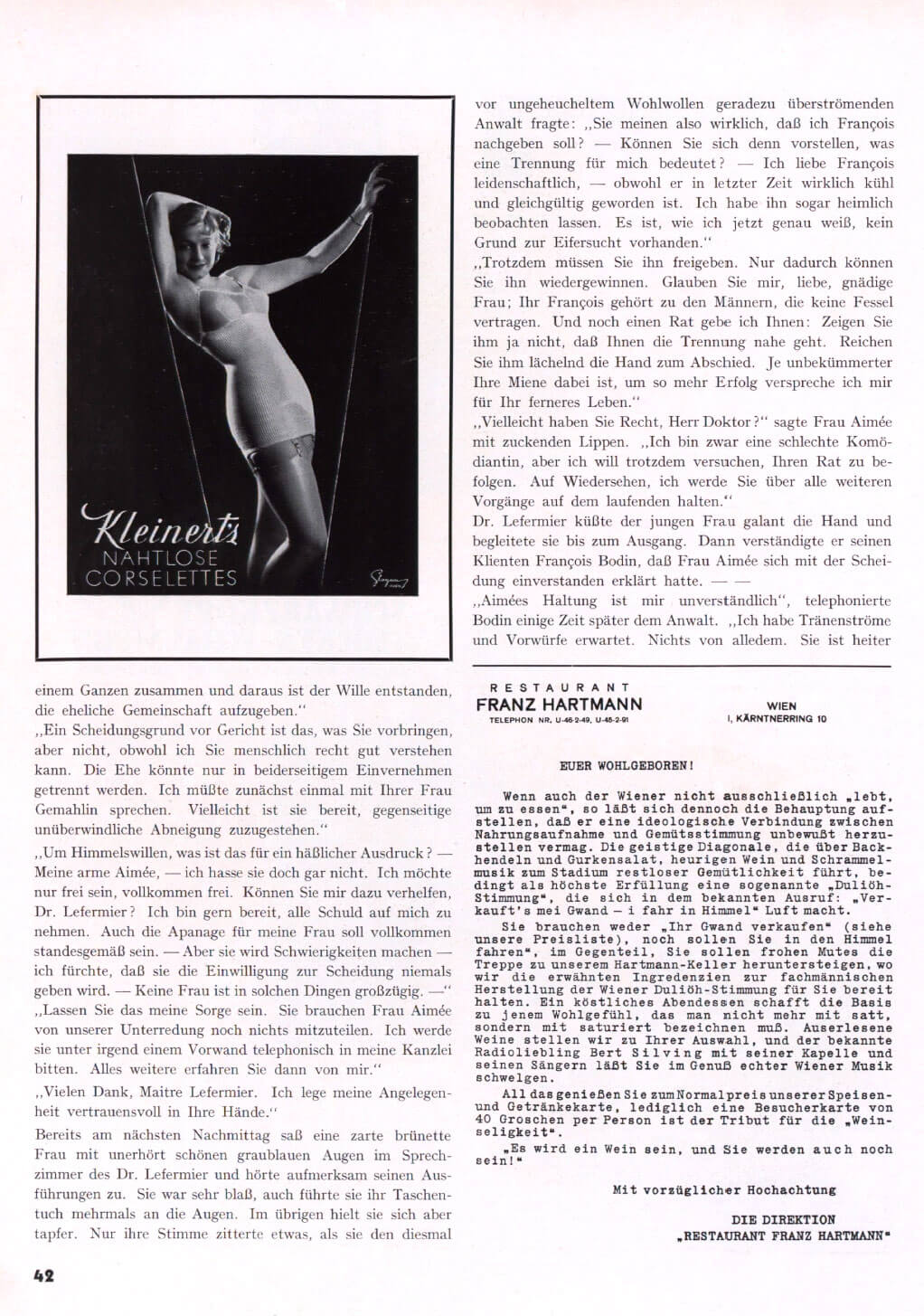 Support of Hitler and his fascist political agenda became overt in the April 1938 issue of Moderne Welt; published a month after the Austro-German Anschluss of March 1938. [Fig. 13] This issue marks a definitive change in which Austrian women photographers – the majority of whom were Jewish – were completely excluded from Moderne Welt, to be replaced by government-sanctioned photography agencies or film studios. [15] Legally Jewish photographers at this time had their professional licenses revoked, and Jewish people were no longer admitted to the Graphische Lehr- und Versuchsanstalt. [16] Companies that were Jewish-owned – for instance the original publisher of Moderne Welt – Atelier Bachwitz AG – were quickly Aryanised. [17] As a result, most women photographers working in Vienna at the time fled Austria. [18] Within a few months Moderne Welt pivoted from a light-hearted magazine for women to a politically motivated propaganda tool; ‘the monthly magazine for a good society.’ [19]

Ironically, throughout the final twenty issues of Moderne Welt published after March 1938, there is the work of one Jewish woman photographer that appears time and time again; an advertisement for slimming tea by Edith Glogau. [Fig. 14-15] Although Glogau emigrated to the United States in 1938, this image – in its various iterations – was included in over half of the issues of Moderne Welt up until its last issue in 1939. Whereas nude photography was pioneered in the 1920s as a sign of sexual liberation, seeing it in the context of the now politicised Moderne Welt brings forth various associations with the ways in which physiognomy was used to further the political agenda of Aryanism. [20] Rather than a celebration of femininity, the model’s body is appropriated; the photographer’s voice silenced again. It is almost as if the photography in Moderne Welt came full circle – from tentatively including women photographers, to a celebration of their contribution to the cultural zeitgeist, to their exclusion once more – which leads one to question; within the print run of Moderne Welt, for whom did modernity mean progress?

[15]
For instance, the co-founder of one of Hollywood’s largest film studios – Metro-Goldwyn-Mayer – Louis B. Mayer (1884-1957) collaborated closely with the fascist German government as late as 1939 to ensure film distribution in Germany, even though Mayer himself was the son of two Jewish immigrants. To read more about Hollywood’s collaboration with Nazi Germany, refer to: Ben Urwand, The Collaboration: Hollywood’s Pact with Hitler, (Harvard University Press: Cambridge; London, 2013)

[18]
For full biographies see Appendix A. 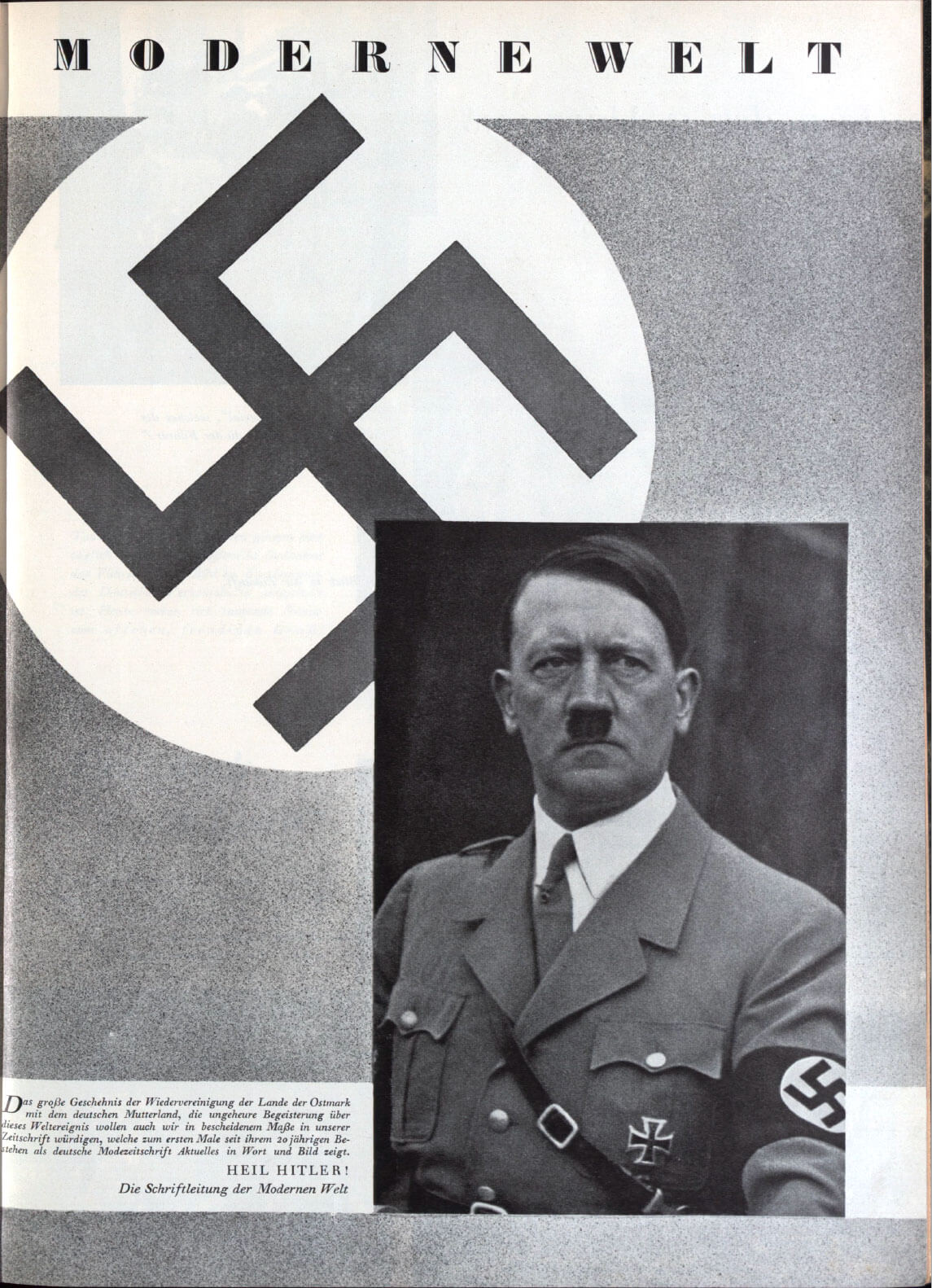 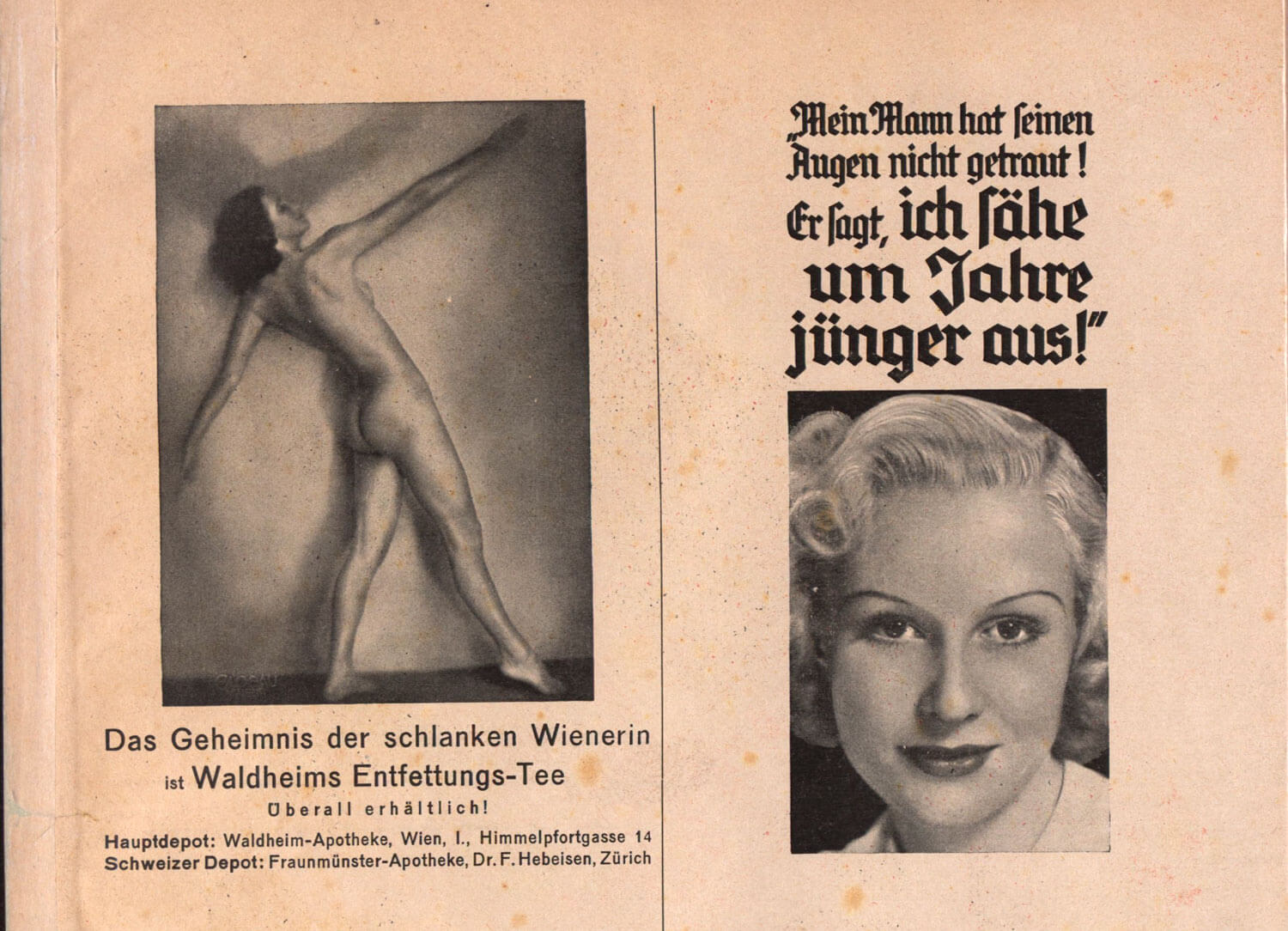 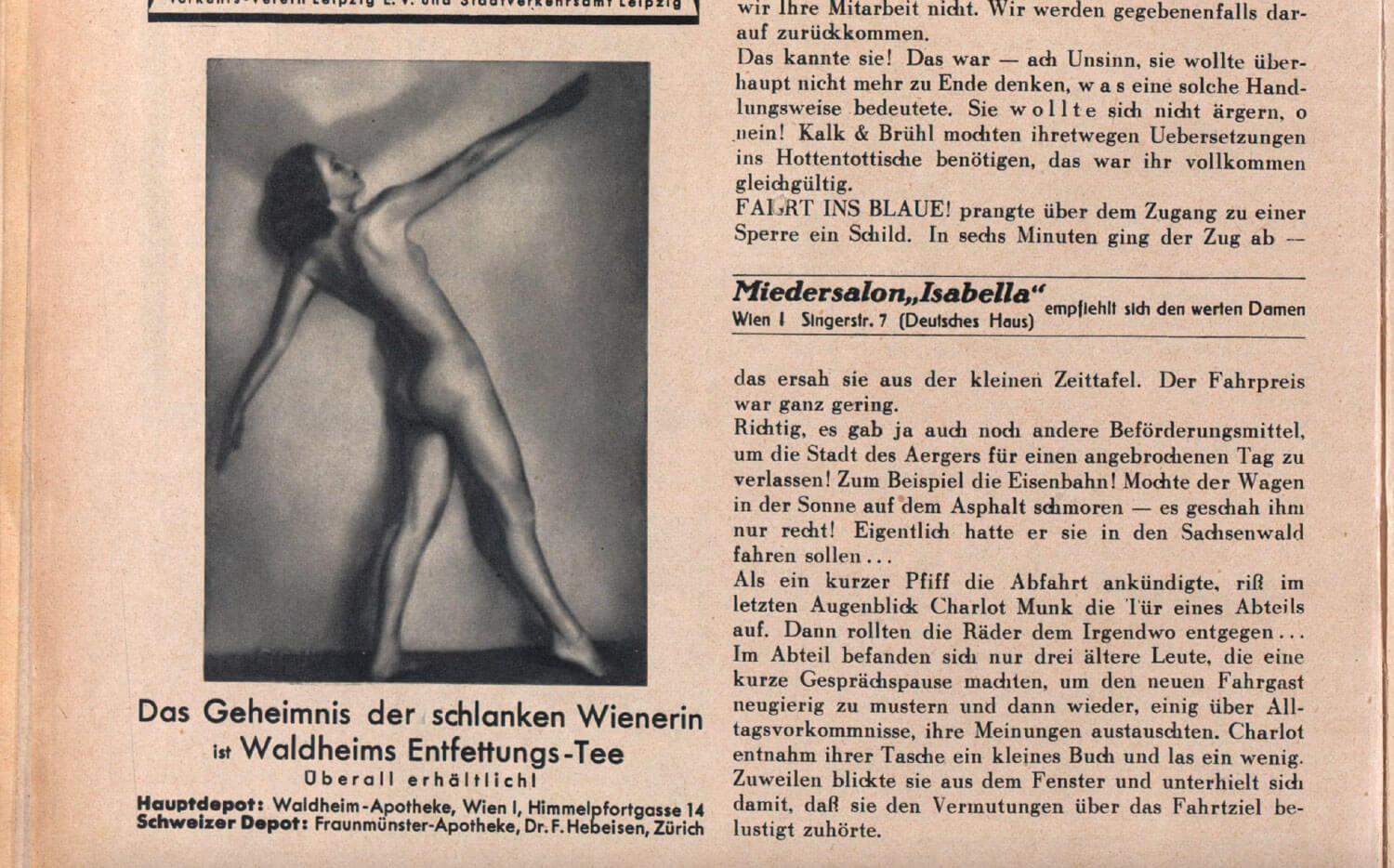